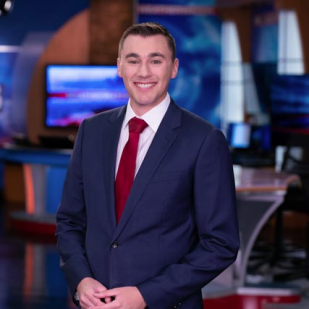 Brian Schnee joined the Fox13 News team as an anchor & reporter in October 2019 after spending more than four years working in the Pacific Northwest.

Brian worked in both news and sports during his time in Oregon. He recently anchored the news every weeknight at KTVL News 10 in Medford, Oregon and prior to that, worked as the Sports Director at KDRV NewsWatch 12.

Brian got his start in local television while working as a multi-media journalist in Springfield, Massachusetts. He credits his mentors and media peers for convincing him that local TV is the way to go! As a native of Connecticut, Brian was a play-by-play sports broadcaster traveling across New England calling high school, college, semi-professional and professional sporting events. Brian’s first media position after graduating Keene State College was as a radio sports talk host in southern New Hampshire.

Brian comes to Utah with his fiancée and his puppy named Barley (who you’ll see frequently on his social media accounts). Brian enjoys hiking, skiing, golfing, eating all types of food and exploring new places. Of course, he’s always open to recommendations! Brian loves talking to people, so if you’re out-and-about and see him, be sure to say hi!

You can find Brian anchoring Fox 13 News at 5 & 9 p.m. every Saturday and Sunday as well as covering stories in your community during the week.

If you have a story idea or just want to drop a note to say hello, send Brian an email: Brian.Schnee@Fox13now.com or send a message on Facebook: @BrianSchneeTV