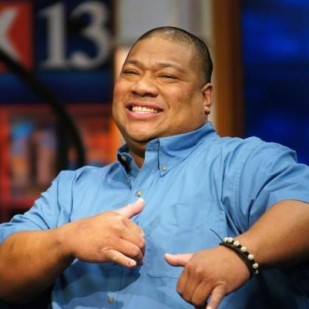 Big Budah is the features reporter for Fox 13’s Good Day Utah and Live at Eleven. Prior to joining Fox 13, he worked in local radio and has appeared in a number of feature films.

He describes himself as a “fat guy with a mic and he’ll do almost anything to make someone smile.

Budah and his wife are the proud parents of five children. He has learned that if his family laughs at his antics, so will anyone else.

Off-camera, he is the same guy you see during his live shots on Fox 13. And if you can’t tell, he loves life as much as he loves his job.

Budah loves food and sports. He spends his spare time coaching his kid’s sports teams. Before Budah joined the FOX13 Good Day Utah team, viewers will remember him from his radio career in Salt Lake City. He has been on Clear Channel’s KISN 97 as well as Millcreek’s Power 107.9 and U92.

Prior to his radio career in Salt Lake, Budah was also doing radio in northern California.