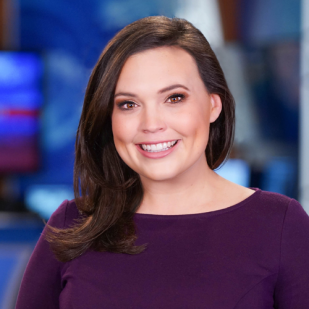 Sydney Glenn joined the FOX 13 news team in Sept. 2019 as a multi-media journalist.
After three years in Myrtle Beach, S.C. as an anchor and multi-media journalist, Sydney is happy to be back closer to home. As an Arizona native, Sydney grew up skiing in Deer Valley and has spent many summers in Park City escaping Arizona’s heat. She is excited to call Utah home!
Sydney covered a wide variety of stories while in Myrtle Beach. She spent weeks covering the before, during and aftermath of Hurricanes Matthew, Irma and Florence. She also covered a deadly mass shooting in Florence, SC. that left two police officers dead. There were also many happy stories in between where Sydney was able to highlight incredible people in the community. She enjoyed exploring the East Coast and trying out classic southern dishes like chicken bog and cheesy grits.
Sydney graduated from Arizona State University’s Walter Cronkite School of Journalism and Mass Communication in 2016 where she majored in broadcast journalism and minored in meteorology. Her love for storytelling started at a young age and she considers herself a news junkie.
When she’s not at work, you can find Sydney traveling, volunteering, spending time with friends and family or out shopping for good deals.
If you have a story idea, you can send Sydney an email at Sydney.Glenn@Fox13now.com